The Eurovision Song Contest
Getting ready for 2006

Numerous hopefuls (including Kym Marsh of the group Hear'Say) competed in a live programme shown on BBC 1 on the 4th March. This was to select the song that will represent the United Kingdom.
The winner? Teenage Life by Daz Sampson.

I've heard it. And, thanks to a very dodgy signal with the channel 'B4', I've seen part of the video for the song. My personal thoughts? I almost like it. Okay, the pseudo-rap style is pretty naff, but I quite like the words and the song is almost anarchic in a fluffy sort of way.
Certainly the message is something I can identify with - like "school's all done with ... now what?". Attending a boarding school, as I did, it was all the more poignant considering that I will probably never see the majority of my classmates again...

The animated GIF sequence above was taken from a LP VHS recording of the song. It represents every other frame, according to by video's idea of frame-skip (so possibly about 10 actual frames?). The bizarre framing, cutting, and the rather obvious continuity errors are actually all present in the video for this song. Is this intended - a reference to school plays from hell - or was this simply made on a really really low budget? :-)
I'll predict it'll come in 16th place with 52 points...

Some people have emailed me to say I should show more support to the song of my country.
Actually, I now live in France so I guess I ought to be supporting the French song...
But anyway, those who have been reading my stuff here (and 2000-2002 on usenet) will know that I always say the UK will come 16th with 52 points.
Unless the 2007 song is pure gold, I'll say this again next year...

Infamy! Infamy! They've got it infamy!

(with thanks to Frankie Howerd for the amusing subject title!)
I was contacted by a feature writer from a news agency who was wondering about writing a light-hearted article about me, as a Eurovision fan.
She said she'd discuss things with her editor and call me back... but she never did. I guess I wasn't the right sort of fan she was looking for - perhaps she would be better contacting a German? They seem to be more into the zany side of it... instead of boring ol' me!
Never mind. I might not paint a Union Jack on my face, but I'll be here, watching both contests, and writing my thoughts as the programme is broadcast.
You will be able to read about it the following Friday (when I'm next on broadband to upload the site updates!).

And over here in France... 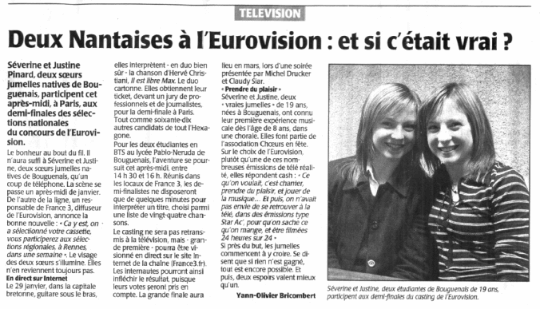 Séverine and Justine Pinard, twin sisters from Bouguenais, will participate this afternoon, in Paris, in the semi-final of the national selections for the French Eurovision entry.

The happiness at the end of the wire: It would have been sufficient, for Séverine and Justine, to have the 'phone ring.
The scene passes one afternoon of January... On the other end of the line, a director of France 3, broadcaster of Eurovision in France, announced the good news: "Here you go, we've selected your cassette, you will participate in the regional selections, in Rennes, in one week's time." The face of the two sisters lit up, though they could always return...

Live on the Internet
On January 29, in the Breton capital, guitars under their arms, they sing - in duet, of course - the song Il est libre Max written by Hervé Christiani. They receive their ticket, before a jury of professionals and journalists, for the semi-final in Paris. Just like the seventy other French candidates.
For the two students of BTS at the high school Pablo-Neruda (in Bouguenais), the adventure continues this afternoon, between 14h30 and 16h. United in the building of France 3, the semi-finalists will have only a few minutes available in order to sing their song, chosen from a list of twenty-four songs.
This semi-final won't be broadcast on television, but - a big first - it will be available on-line from the website of the channel (France3.fr). The Internet users will be able to affect the result, since their voting will be taken into account.
The big national final will take place in March, during an evening programme presented by Michel Drucker and Claudy Siar.

"Having fun"
Séverine and Justine, two identical twins, 19 years old, born in Bouguenais, had their first musical experience at the age of 8, in a choir. They are a part of the association "Choirs in celebration". On their choice of Eurovision, rather than those numerous 'reality television' style broadcasts, they answered: "This is what we wanted, to sing, to have fun, and to play music. We didn't feel like discovering on TV, in a programme like Star Ac', that everybody knows what we eat, and be filmed 24 hours a day."
If close to their goal, the twins begin to believe it. They say that if nothing has been won, everything is still possible. And then, two hopes are better than one.

The picture on the right has been taken from France3's website. For some reason the picture was somewhat on the poor side, so I have scaled it 120% (a fifth larger), gamma corrected it so you can see who it is, and also removed the extreme red cast of the picture. Cute, aren't they?
L'image (à droite) a été prise de site web du France3. Pour raison inconnue, l'image était de mauvaise qualité. J'ai fait ça un cinquième plus grand, a corrigé le gamma donc vous pouvez voir qui elles est (!), et aussi j'ai extrait la fort teinte rouge. Mignon, non?

Back to the Eurovision 2006 index