I am not overly taken by ChartShow TV and B4. This isn't a fault of the operators, it is a fault of the amount of rubbish in the charts right now. I happen to think the Germans, on the whole, have a better handle on what a good song sounds like. Okay, okay, they go all cheesy for Wham! at Christmas and they're probably the only fans of David Hasslehoff's musical career on the planet... but hey, we Brits had Mr. Blobby so be quiet, we ALL make mistakes! It would be nice to have the option of MTV and Viva.
I would like to have to option of watching Conan or Leno on CNBC (if they're still on?). There aren't a lot of chat shows around. I'm not sure we can consider Lily Allen's to be more than a bizarre sort-of-MySpace-inspired fluff. Jonathan Ross' can be quite variable (nice interview with Goldie Hawn). And we won't even discuss that mess hosted by "Peter and Katie". CNBC is not FTA on Sky, it is on the older Astra at 19.2°E.
Sometimes some interesting stuff comes up on TV5 and/or arte (in French). TV5 is available on Sky... for a price. Both versions of it are available FTA at 19.2°E.
I am also an armchair fan of ice skating, called "figure skating" in English and some translation of "artistic skating" in most other languages. This is because, well, it looks impressive, it's a lot more skillful than kicking a ball around, and having been in skates once in my life (with all the grace and control of an airplane crash landing without any wheels) I can assure you it's rather more difficult than it looks. I looked up various terms (Bielmann, Lutz, etc) on Wiki but I don't think I could tell them apart just by watching. Oh, and that six-point-zero scoring thing reknown for Torvill & Dean way-back-when and used in the various televised celebrity-on-ice programmes is actually a relic. The scoring system now is, well, complicated. I preferred six-point-zero, but too many people were getting them for performances that were not necessarily the best of the individual competition. As for my call? Hands down Isabelle Delobel & Olivier Schoenfelder for the pairs. Irina Slutskaya (retired?) for the ladies, and where will the men be without another stack of gold around the neck of Evgenie Plushenko? Well, this is the biggest paragraph so far, and I can watch all of the European action on EuroSport... only not on Sky 'cos it isn't an FTA channel there. Other interesting sporting events? Well, there is La Tour de France which is great for checking out the scenery. There's only so many pictures of men in sweaty lycra that I can stomach (which is practically none), but those helicopter views of the mountains. Awesome. Oh, and for people who like some speed and bravado, there is always the cross-Kenya (Kenya?) rally, or those nutters on a skate-board like thing that go head-first down a frozen passage (luge?). For comic relief, you can always giggle at curling. But only at 19.2°E 'cos that's where EuroSport is FTA.

If all else fails, I can always channel-hop absentmindedly through a selection of Spanish, French, and German programming.

This document will be split into two parts. Here I will discuss the theory and show a few pictures of a DiSEqC switch in place (everybody say wooo) and in part two you can have the fun of laughing at whatever method I hack together to hold the second LNB in place.

There are two solutions to receiving signals from different satellites. The most obvious is to use two dishes. That's a worker, for sure, and will always get you the best results as each dish can point directly at the satellite in question. You can also vary the dish size as those weaker satellites may require a larger dish.

This option may be somewhat necessary for an ex-pat Brit living in France who has some interest in watching French TV. British TV, on the Sky birds, comes in at 28.2°E while the only source of FTA French channels if you do not have TNT (France2, France3, TV5, but not TF1 or M6) is Atlantic Bird 3 at 5°W. It is unlikely, given the 33° separation, that you will receive both satisfactorily on one dish, so two dishes are likely to be a necessity.
(all the French TNT channels are available at 19.2°E, plus all of the France3 regions, but you'll need a Canal subscription in order to view them).

Multi with one dish - the theory

The tidier solution is to find a way of arranging two LNBs on one dish. The normal LNB position (at the end of the arm) is an area called the prime focal point. When the dish is pointed directly at a satellite, all of its collected signal will be fed into the LNB sitting at the end of the arm.
We are talking of radio waves, with the dish as a reflector, and the concave design to help concentrate the signal into one place (instead of simply reflecting it, which would not be terribly useful).

Now imagine your dish is shiny, like a desert spoon. Imagine that satellite transmissions are visible, like sunlight. If you remember your school Physics you'll be thinking "Hang on, you can bounce light off of it in all sorts of funny ways".

I did not have a desert spoon handly, so I have rigged up a little bit of show and tell with a piece of alu foil. At the top of the picture you can see the light source, one of those multi-LED lamps. This is bouncing off of a piece of foil in a rough 'dish' shape directly into the camera. 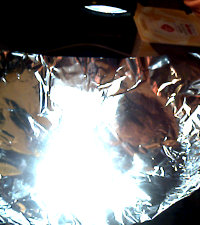 Angles this severe are very unlikely to work in practice, it was done in this way so you could see the light and the light source. Notwithstanding, the principle is correct. These other focal points are known as secondary focal points, and with a little bit of calculation you can determine where exactly to position the secondary LNB.

Consider a dish pointed at Sky. That is essentially 28°E. The Astra birds are at 28.2°E while the Eurobird is at 28.5°E. In terms of satellites, there are hundreds of miles between them. In terms of your dish, they both appear to be in the same place. Now if our dish is pointed to 28° (black line, black LNB, in picture below), and we would like to receive the Astra 1s at 19° this provides us with a simple maths problem.
If you look at your Sky LNB from the position of the dish, the location of the older Astra birds is therefore 9° to the right (blue line). Because we are using the dish as a mirror, you will want to place your LNB (blue LNB) about 9° to the left.
You can read all of that again if you wish, here's the picture...

DiSEqC, which I say (probably incorrectly) as "di-sexy" (!) stands for Digital Satellite Equipment Control. It is a method of modulating the 22kHz 'tone' (the one used to select high band or low band of the LNB) in a way that can send commands to remote equipment. While this equipment may be of varying levels of complexity, the basics are:

The simplest option is the one that I am using. A fixed dish, multiple LNBs, and a switching unit. My 2-way DiSEqC 1.0 switch cost me €20 (about £15) and that was from a chain DIY outlet. At a specialist satellite shop, or perhaps by mail order, you ought to get one for around €12 (under £10). Don't forget you'll need a few extra 'F' plugs and maybe some short lengths of satellite cable. 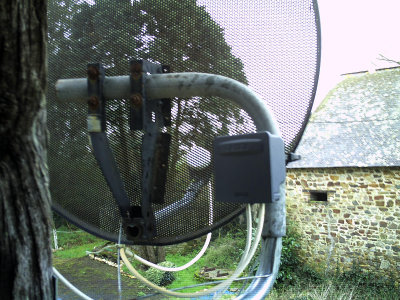 I purchased a 2 way switch (two LNB inputs, one output) because it was what they had, and also because I don't feel that I was going to be aiming for anything more adventurous. I have no inclination to receive Hotbird and while I would like Atlantic Bird 3 for the French channels, it is out of the realms of possibility using a 60cm dish pointed 33° in the wrong direction.

In the picture above you can see the switch mounted on the satellite mount. There is only one LNB installed at this time, so I have hooked this up as LNB A and the receiver to the output. As you can see, my switcher comes complete with a nifty plastic box.
After installation, to test the switch was working, I ensured that DiSEqC was turned off on my receiver, then I added BBC News 24 to the Astra 19.2°E channel list. You can add any channel you like, so long as it isn't one that is actually on the satellite! I tuned to the channel on the 19.2°E satellite, and then directly to its equivalent on the 28.2°E satellite. In both cases, the channel appeared on screen.
Then I set 28.2°E to be the 'default' satellite; for the switch will, in the event of starting up with no instructions, route the first LNB through to the receiver. So this was denoted as satellite 1/2, with the (unconnected) 19.2°E LNB set to be the second LNB, or 2/2.

Now, by using the "recall" button (switches from current channel to previous channel), I was able to switch between BBC news at 28.2°E which showed the channel as LNB A was connected and aligned, and supposedly BBC news at 19.2°E which showed "No signal!" as there was no LNB present. This was proving that the switch was taking the primary LNB out of the loop and, supposedly, switching to the secondary LNB. It isn't a totally conclusive test, but it is exactly what I expected to see happen.

The final task, with severe weather coming from the west, was to re-orient the switch box so it faced west - thus reducing the possibility of rain ingress. This wasn't too big a worry as the switch was a metal box inside the plastic box, with room to spare. It is still a good idea if your switch box is at all exposed to be certain to align its most protected side towards the prevailing winds. The front is a tight slide-down cover and the storm winds are westerlies, hence... 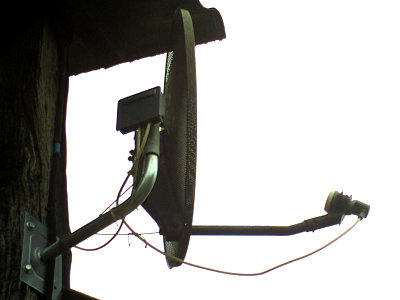 The cable is dangling away from the LNB arm as the weather changed like the spin of a roulette wheel as I was installing the switcher box. I was getting a good soaking and the gales were rolling through, so I (wisely!) decided that leaning out to tie up the cable wouldn't be the smartest idea I've ever had.

And the second LNB?

This will be discussed in part two.

Many many thanks to Ewen and John, both of whom provided me with a small universal LNB in a plastic case, as is sold from time to time by Lidl in the UK. Together, these probably weigh about the same as my older metal-cased LNB. When weight matters, these little light LNBs are just the ticket!
· Main index ·
Copyright © 2008 Richard Murray