FreeSat: A peek inside

Strictly for the geeks...

The information presented here is highly random. I would appreciate confirmation of the capabilities of the receiver, and if anybody is able to snarf a dump of the firmware, discover hidden facilities, etc... please let me know!

I don't want to lay claim to discovering the Digibox's installer menu, however pressing 0 then Select in the setup menu made sense. I didn't need to look that one up!
I have tried all sorts of options in all sorts of menus, and either there is no hidden menu, or it is hidden behind some set of magic keypresses, such as 1 3 9 7 or the like?
I would be surprised if there wasn't some sort of control menu, to at least set up is the LNB to be powered? and is it a Universal 9.750/10.600 type?.

The box unscrews quite easily. There is a fragile shatterable sticker joining the lid and bottom so if you attempt to gain access to the receiver, it will be obvious. Because I live in France, I figured I could easily void the warranty as sending my unit back for repair would work out more expensive than buying a new one. As for you, I wouldn't suggest you look inside, and if you must, wait until the warranty runs out!

Once inside, you will see a basic partially populated board running across the front of the receiver. This is the power supply unit, providing 3.3V, 5V, 15V and 21V.
Behind that is the clean and tidy looking main board which consists mostly of a giant metal can (not really visible in the picture below as I have removed the lid). The tuner module hangs off of the right-hand side. 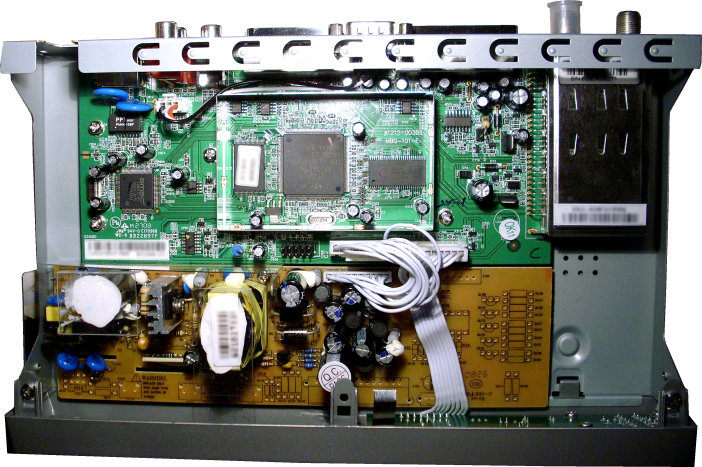 The heart and soul

As is common nowadays, the guts of the receiver is one single integrated circuit; which identifies itself as an ST OMEGA STi5119ALC. I was not able to find a datasheet for this particular device, however sales blurb for a related ST OMEGA device (the 5118ALC) points to it as being a fairly powerful low-end satellite-receiver-on-a-chip based upon an ST20 processing core with integrated video processor. Or, from ST's 5118 blurb: This information is, again, part of the 5118ALC sales blurb, not the 5119ALC. I don't imagine there are likely to be too many differences, a slightly later version, may do something more suited to freesat's requirements - especially given how the ST website makes no mention of the 5119.

I am, actually, quite surprised to see a clock speed in the order of 200MHz, with up to 166MHz memory. In responsiveness, it 'feels' like mom's old PC (a 486DX/66) - and yes, I know that comparing clock speeds is fairly meaningless these days, especially between CISC and RISC architectures, I'm just saying at times it seems to be about as responsive as a comatose squirrel!
Certainly, while BBCi is going to be a sort of 'scripted' system (like some form of P-code that the MHEG will interpret to display the interactive service for you), it is possible to tap out a four-digit page reference before you see any confirmation of this on-screen. Luckily the inputs are buffered so keypresses are not swallowed.
On the other hand, moving around the EPG and/or channel list can be slow and it is easily possible to press the Down button faster then the receiver can keep up, and these extra keypresses are lost.
Kudos for one thing though - power up, switch on, it's ready for you. No waiting for e v e r like when the Digibox boots up.

The RAM would appear to be a Zentel 43V56S40ETP-G6, which matched nothing in Google, so at the moment I cannot say what the capabilities actually are. At a pure guess I would think maybe something in the order of 4Mb (given that this receiver is expected to support interactive facilities plus hold a 7-day EPG), with a layout of 256K×16-bit, but don't quote me on that. Oh, and given the low power consumption, it is probably a CMOS part. It may be the last characters of the part are "66", not "G6", which would imply 66ns access.

The FlashROM for the firmware lost most of its markings due to the glue of the sticky label affixed. It would appear to be ST M25W320 60ns, but some of this is guessing with the aid of a powerful floodlight and a magnifying glass! Again, diddly-squat on Google for this part, so as a pure guess, 2Mb-4Mb seems to be a fairly common size.
The closest match I can find in my Farnell is M29W320 (which it may actually be, given the difficulty in reading the ID), which is a 32Mbit Flash (4Mb×8 or 2Mb×16) with a 'boot block' at the bottom of the memory space.

I have not yet located an NVRAM device, so I do not - as yet - know if the configuration is held on a specific small IC, if it is a part of the FlashROM, or if the 5119ALC itself contains some form of NVRAM.

The system would appear to be clocked from a central 27MHz can crystal; thus we can presume that the processor has some form of clock multiplier onboard and the design can use a relatively inexpensive can crystal instead of something faster (and more expensive to purchase and design for).

In the picture below, the integrated circuit to the right (with the sticker) is the FlashROM (which contains the receiver's firmware). The 'chip' to the left is the system memory (RAM); and the big square lump is the OMEGA processor/video. As with the SilverCrest SL65 and any number of modern FTA receivers, it is essentially a three-chip design.
Note, incidentally, the ten-pin header on the board (top centre). One would presume this is for programming the device in the factory and/or if satellite updates are not available or do not work. 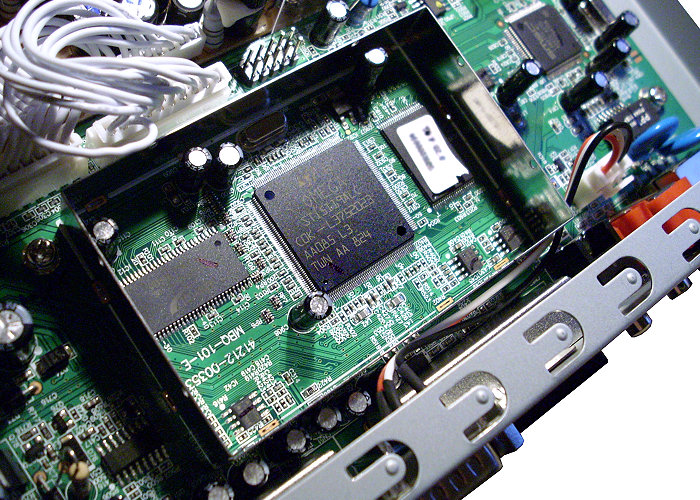 Interfacing to the outside world comes in two forms. The first, and likely to be the most useful, is the ethernet connection. Useless at the moment, it is touted as being able to - in the future - provide access to services such as BBC iPlayer.
The network connection is an RJ45 socket, for xxbaseT(X) networking. The socket has two little indicators built in, a yellow one meaning 'network socket available' and a green one which will pulse during data transfer. This is in common with the indicators built into most PC network cards.
The actual network interfacing is by way of a SMSC LAN9115-MT. This is a non-PCI Ethernet capable device that is specifically designed for use with microcontrollers and embedded systems (hence a PCI bus view of the world would be inappropriate; especially if the µC works in a 16 bit memory system). It supports both 10mbit and 100mbit operation.

The other form of connectivity is the undefined serial port, which - like the Sky Digibox, appears not to have much of a purpose. That big white plug in the picture below is the serial - it is a three-wire setup, so only Tx, Rx and GND are implemented.

I have not yet had the time/inclination to try connecting a computer to either of these ports to see what (if anything) can be performed using these ports. By way of an example of what I mean, take a look at my PSMD software. 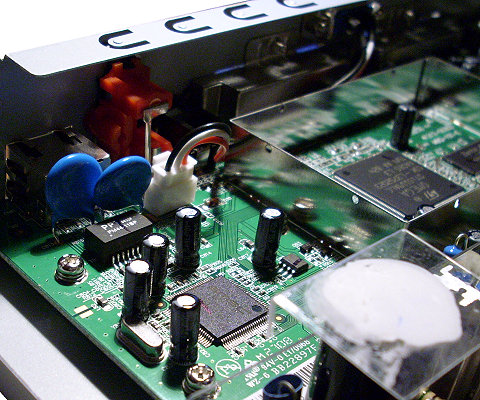 There is no need for a fan. The receiver may feel warm when in operation, but it is certainly not hot like my old Digibox.

Lurking within the remote controller are 12 extra buttons which are not implemented in this version of the receiver - these are under the lower segment of the sticker at the bottom of the controller. I would be surprised if the HD model needed this many additional buttons, perhaps there is a PVR version coming sometime soon?

In addition to this, if you hold the receiver up to a bright light, you can clearly see cut-outs in the front panel which are, most likely, designed to support some form of display. Perhaps a more advanced version will tell you what channel you are watching, and/or other information for a PVR version? If nothing else, a clock is useful!

Unlikely. As with Sky, part of freesat's market power is in creating and maintaining a proprietory specification. I would love to see devices such as this work on a more open source plan, so that those who are inclined can add functionality, tidy up quirks, and make their hardware do what they'd like it to do - however for freesat to release such information would be tantamount to them giving away business. Remember, unlike Sky, freesat do not originate any programming. They just licence a tidy package for us end-users; and I have a freesat box because it can do things my SL65 can't do (and, accordingly, vice versa).

I wonder if some form of licence could be drawn up (like you are only allowed to use these sources and the ideas within with the official range of freesat receivers and you are not permitted to profit from them; obviously in many more words, but that's the gist of it) to permit some form of releasal of information on these receivers? With a little bit of work, the freesat receiver could function as a solid all-round solution while being true to the facilities provided by freesat. After all, wouldn't freesat prefer people to use the receiver that caters to their specific needs, especially if it is a freesat box? Personally I would make non-Freesat channels easier to access, add DiSEqC (as it is kinda necessary for my specific situation) plus see about sorting out the manky EPG implementation. But that's just me.
If anybody from freesat is reading this (I should be so lucky!) and am thinking I am mad, I will point out that MHEG-5 is a 'known' standard, and the UK-specific version is available as a downloadable PDF (I have a copy someplace, it is linked from Wiki); and as for the EPG, it has been (mostly) figured out - refer to http://www.digitalspy.co.uk/forums/showthread.php?t=837707&page=2.
This would imply that it is only a matter of time before non-freesat receivers can be upgraded to full or partial support for what freesat has to offer. So with 200,000+ freesat receivers now in operation (source Digital Spy), why not invite willing people to work with you to make the freesat box the be-all-and-end-all?
Comments? heyrick1973 -at- yahoo -dot- co -dot- uk