"OvHTML" is a filter for OvationPro that allows you to import HTML documents.
It supports a variety of HTML tags and JPEG images, and it'll try to render to something akin to HTML 3.2 (only without tables or frames).

OvHTML is available for download from here - it is free. It is simple to install, equally simple to use (just instruct OvationPro to open an HTML document), and a multitude of configuration options allow for tweaking to suit your tastes. 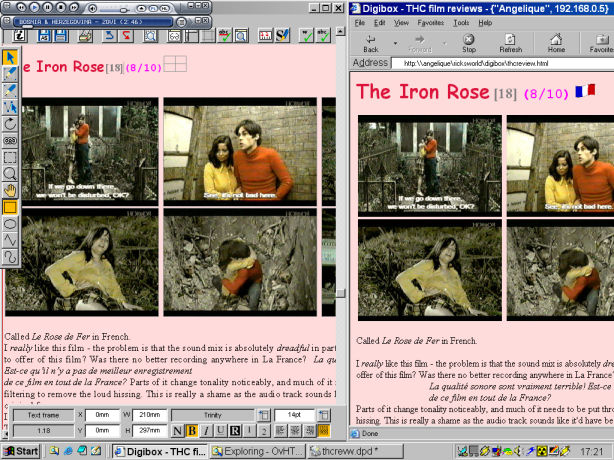 An example of OvHTML compared with MSIE 6.
Click here to view the original document...

Differences between the Windows and RISC OS versions

Okay, let's get the Bad News out of the way first. Here's what you don't get:

But it isn't all bad news. The Windows version has been developed beyond the last available build for RISC OS, so here's the additional stuff:

The HTML parsing is not 100% correct yet (the problem in the example screenshot (the italicised French text) is due to the use of unsupported tables, not a parsing fault); however as each problem is reported to me, I look to improving the quality of conversion generated. Additionally, OvHTML includes a number of configuration options to better cope with 'broken' markup.