From ARMwiki
Jump to: navigation, search

Of these registers, only two have specific purposes.

Various conventions exist which place other specific uses on registers (such as R13 being the Stack Pointer), however the ARM itself does not place any requirements onto other registers. Indeed, if you preserve (i.e. push to stack) the return address in R14, you can then use it as a general purpose register.

If you are writing user mode programs: this, plus the applicable convention, is about all you need to know.

The reality, however, is that the ARM offers thirty seven registers. Thirty of these are the general purpose registers, named R0 to R14. This is possible because which registers you see depends upon what processor mode you are in. Then there is R15, the Program Counter. The remaining six registers are status registers, and their visibility depends upon the current processor mode.

In general, R0 to R12 are the same, except when in FIQ mode where R8 upwards are shadow registers.
R13 and R14 change depending upon the processor mode, with the exception of the two lowest privileged (User and System). This register is banked across all modes (except System) to permit each mode to have a private stack set up.
R14 is banked similarly, so if a User mode program calls a System mode function when an Interrupt happens that is itself interrupted by an FIQ... all would nominally place their return addresses into R14, however since in each case it is the banked R14, things don't fall apart.
For FIQ handling, R8 upwards are private so registers can be set up and maintained across FIQs and processing can begin without needing to load registers from memory.

A diagram should make this clearer: 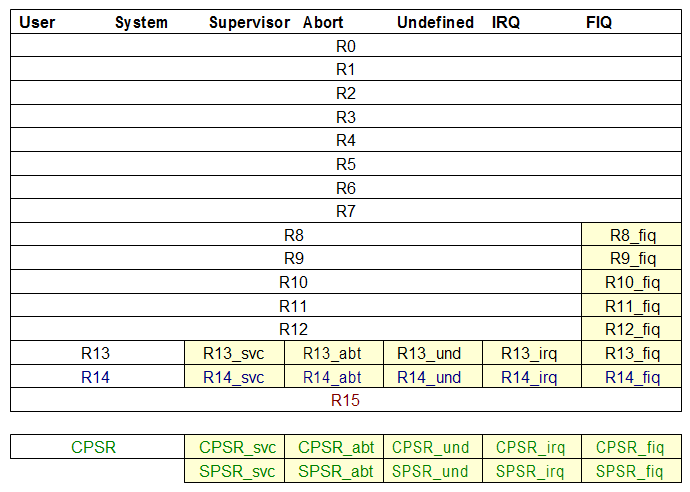 The Arm Procedure Call Standard defines names for the various registers, as follows:

Upon function return (by pushing lr into pc), v1-v6, sl, fp, and sp must be the same as they were on entry.

The original APCS standard is defined in the RISC OS Programmers Reference Manuals on p4-399.

The current APCS standard is defined by ARM Ltd in this PDF document.

The "26 bit" in the name is defined from the Program Counter being only 26 bits wide, thus permitting R15 to hold also the status flags. While this system worked well, and allowed one simple instruction to restore all stacked registers and exit the function, it was greatly limited by the fact that 26 bits only permits addressing of 64MiB. When the ARM was designed in the late '80s, this was a massive amount of memory - in fact, no MEMC (memory controller chip)) is capable of addressing more than 4MiB, and since using multiple MEMCs was often quirky, the majority of Archimedes machines contain no more than 4MiB, and I have not seen any with more than 8MiB. The maximum possible is 16MiB (with four MEMCs), both due to hardware constraints and also due to the MEMC's view of the world splits the 64MiB memory allocation into 32MiB of logically-mapped memory, 16MiB of physically mapped memory, and 16MiB of 'other' (I/O, and Read:ROM, Write:VIDC/MEMC/AddressTranslation).

For RISC OS machines of Acorn era, the register set is as follows: 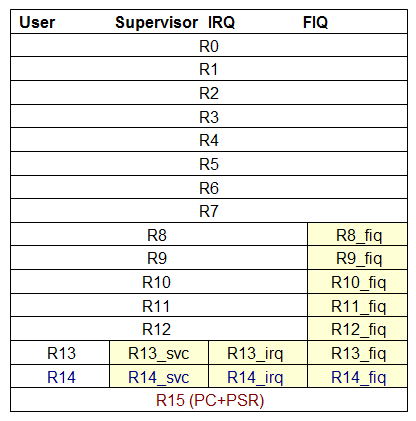 Because the RiscPC processors work in 26 bit and 32 bit mode (to allow more than 64MiB to be used), things are somewhat more complicated. However as an end user, you can assume that RISC OS versions lower than RISC OS 5 will appear to function in a 26 bit way (with individual tasks limited in the amount of memory that can be addressed). You will, however, need to read the relevant Technical Reference Manual if you plan to write IRQ or FIQ mode.

You will need Darren Salt's assembler extension "ExtBasAsm", and while you are there you might like to pick up "DebuggerPlus".