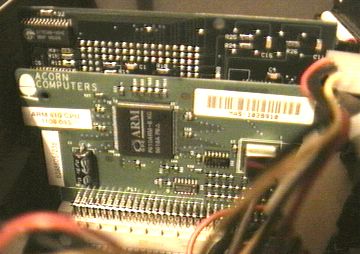 In front, an ARM610 (33MHz) processor and support circuitry on a RiscPC processor card.
The RiscPC can accept two processors, the card behind the ARM being an Intel 486SXL-40
also clocked at 33MHz. Note the incredible size difference between the two processors. 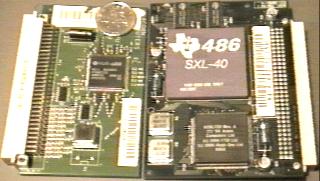 On the left, an ARM710 processor card with a British 10 pence coin to give you an idea of size.
On the right, the original series 80486 co-processor.
It gets rather hot, but not hot enough to require a heatsink or fan.
The ARM, on the other hand, gets most of its heat simply by being near the 486!
The other big chip on the co-processor card is the ASIC, a device to munge the 80486 I/O into
something that can interface with the ARM processor bus.

If a search engine brought you here, and you are looking for x86 assembler, then you are VERY much in the wrong place!
Instead, you may find this resource useful ..... http://webster.cs.ucr.edu/.

The documents here relate to the low-power high-performance ARM processors used in PDAs, mobile phones, laser printers, Gameboy Advance, and of course the RISC OS computer range (formerly made by Acorn Computers, Cambridge, UK).
A lot of the detail relates to programming the ARM within the RISC OS environment, but it should also serve as a general resource for those programming the ARM under any system. Please note, however, that the 'Thumb' instruction set is not (yet) described.

This information is over two decades old - that means that a lot of it relates to ARM assembler as it exists in a 26 bit world (that means, the original combined PC+PSR, with the processor addressing a maximum of 64MB). There are some notes to different behaviour in a 32 bit world (separate PC and CPSR/SPSR). Much of the rest of the instruction set is identical.

There is no coverage for AArch64, at all.
It's an entirely different thing, and frankly loses a lot of what made the ARM great... but then these days people don't write assembler, compilers do...

Can't find what you're after?

If the downloads don't work...

IMPORTANT The archives are now in Zip Deflate format. Early versions of Spark and PKUnZip may have difficulty in extracting these files. However SparkFS, SparkPlug (see link below) and WinZip should handle them without problem.
This change has been brought around by the fact that several non-RISC OS users wished to view the documents, there were difficulties with viewing the HTML directly from the archive (this works fine with SparkFS), and Zip deflate compresses better than the Spark format (429K rather than 538K).

Like the rest of heyrick.co.uk, this section was written entirely by hand with !Edit (a fairly basic file editor); originally on a 4Mb A5000, latterly on a 32Mb RiscPC 710. No specialised site development tools were used, and don't hold your breath waiting for fancy flash introductions and whizzy Java front-ends. It ain't gonna happen. The content rules. Anything else is only going to obscure the bigger picture. The top titles are in a purpley colour. That, and a few pictures of sexy hardware, are about as fancy as it gets.

The HeyRick assembler site has had approximately 1208661 'hits' since Wednesday, 2nd August 2000.