Please note that these EPROM dumps are provided so that if something happens to your EPROMs (broken legs, blown from being inserted the wrong way around, etc) then you can create your own replacement. 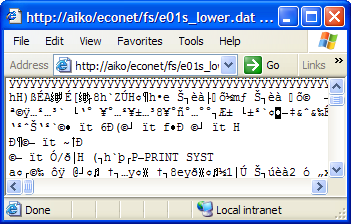 Please note that these dumps may still be somebody's property, so please use them responsibly - to keep old hardware going.

The dumps have '.dat' extensions. They are binary data, so don't try to get your browser to display them, it will look really weird, like the picture on the right here...

On most RISC OS browsers, click on the link while holding down the Shift key to save the file.
On most PC browsers, right-click the link and choose the option Save target as... (or something similar).

Please do not email me to ask what you should do with these dumps. If you don't know, you don't need them!
To those small few that were audacious enough to ask if I had any later versions... don't you think if I did, they'd be here?

Return to the Econet index