The Eurovision Song Contest 2009
Your Country Needs You! 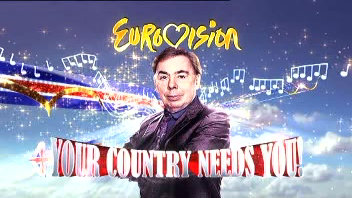 Having realised, finally, that the recent UK entries to the song contest were, well, less than impressive, we are going to have a new method of finding a winning act.

And now I don't want to get my hopes up, however...

A team of professionals, music industry people, and Lord Andrew Lloyd Webber, will be grooming a number of individuals who will perform on televised programmes for public votes. The public will choose the act they like the best, and ALW will write a song specifically for that person/group/act to perform. 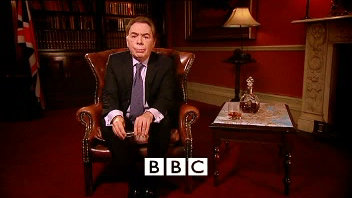 In essence, ALW is doing no less than staking his reputation on this, and it will either be the biggest farce in British Eurovision history (yes, even worse than Gemini (or was it Jemini?)) or we may well win it.
While I'm not a great fan of ALW as a person, you cannot deny his songwriting credentials.

Graham Norton, co-host and Sir Terry replacement even offered up the opinion that the Eastern Europeans take the contest extremely seriously and there is some amount of resentment that we walk in and mock it all (and as a Big Four country, we have guaranteed right of passage, how far would we have made it if we needed to pass a semi-final?). I think it is a very good thing for the commentator of the contest to be aware of this fact, for I'm not sure Sir Terry ever fully appreciated it.

What worries me greatly is that ALW is playing with fire, what with getting the public to vote. I just hope, behind the scenes, the vote results can be 'rigged' slightly if the public do something spectactularly stupid... you know, like in 2007 when we sent a gimmick act instead of the girl that could actually sing...? What the hell were we thinking? 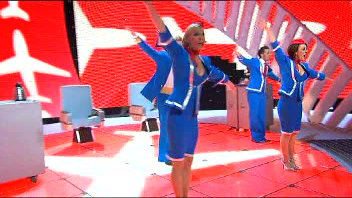 Your Country Needs You! 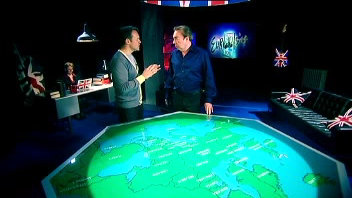 With something of a James Bond theme going on, deep in the bowels of the BBC (well, some otherwise unoccupied corner of a stage) is the HQ for the programme, complete with Union flags and a Moneypenny-wannabe at her desk. It's so patriotic it is bordering on Austin Powers.

Lots of people sent in lots of videotapes, DVDs, on-line submissions. Some got the idea: 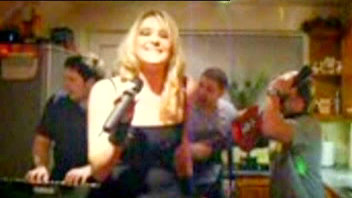 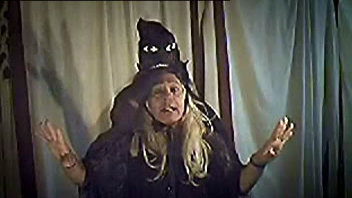 And some? Well, they were good: 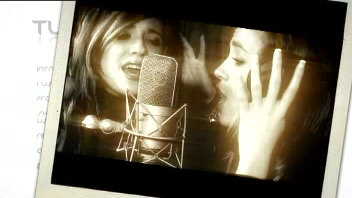 This production, involving Andrew Lloyd Webber, wasn't going to settle for simply saying we've annoyed the hell out of Eastern Europe. Oh no, we first go visit Dima Bilan (who is filming in London) to ask for some advice. 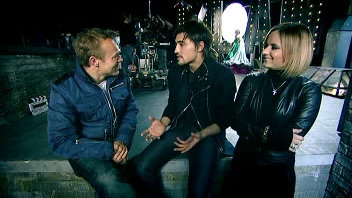 Actually, all through the programme the advice could be distilled down to one simple sentence: we're taking it seriously, you aren't, it shows...

This all pales in comparison to the next interview. ALW only flies over to Russia for a few minutes with... yes, President Putin. Like, what, did he pick up the phone and say "don't s'pose you can pencil me in for Tuesday?"?!? Does he know how long it took the Americans to meet the Russians on home turf? Don't s'pose he could click his fingers and say "It's good to be in control"? ☺ 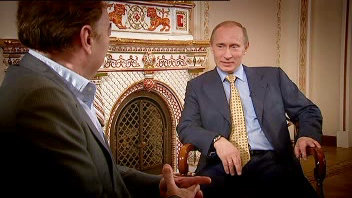 There is also an ambassador's reception, a couple of other countries, and even a peek into the venue which is, let's face it, ridiculously enormous. Get out your magnifying glass, you can see Webber and Norton, barely twelve pixels high... 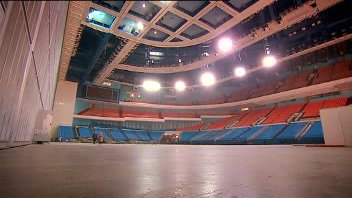 In amongst all these interviews we see some test performances and while some are discarded (a number of solo females were grouped, and the girl group idea eventually discarded).
Recognise these two? 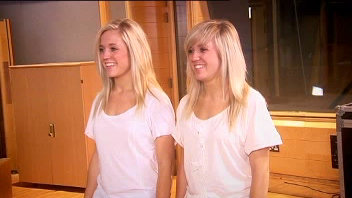 These are "The Twins" as the caption keeps on saying. They do have names - Francine and Nicola; and for my money they are the hopefuls out of the group. 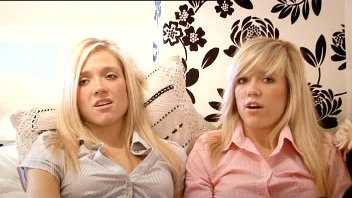 It isn't entirely without incident, for they appear to be, shall we say, emotional? 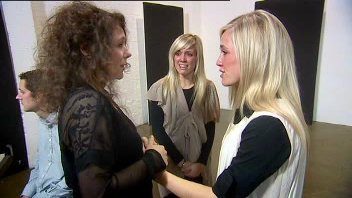 Two reasons. The first is they are extremely cute - especially the fluffier one (right, in the sitting down picture (two up)). Let's get that out of the way, but don't forget it's a televised contest. Looks matter.

The second? In their audition song they performed "No Frontiers" (The Corrs) which may seem an odd choice, especially with some of the lyrics in that song ("and we stack all the dead men in self-addressed crates" being a great example); however the delicacies of the song really allowed the girls to show their capabilities and also how well they harmonise with each other. It is also a fairly emotional song. This is key.

Many a Pop Idol act, Eurovision act, and general talent scout act has performed well, but been lacklustre. I think this is the trap that our 2008 entry (Andy) fell in to. His song didn't set the night sky alight; and while he performed well, he seemed to perform mechanically.
Now compare this with Dima: 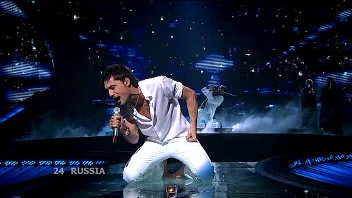 You can be mean and say he's just humping the stage. Or you can look at it again, and sense that he truly believes in his song. Not just in the sense of "I'm a winner", but in the sense of believing in and complementing every single word and hemi-demi-semi-quaver. The icing on the cake, the song itself is about believing, it's about as subtle as "SMOKING KILLS" written on cigarette packs, and - while it isn't a song with lasting appeal, for that small moment in time it outshone the aurora borealis.
Another example? Love Shine A Light, yes, the last time the UK won, many many years ago. This was another song with a message, with emotion, and an American girl who gave it everything. I remember hearing it for the first time on the night and being blown away, as was the rest of Europe.

Webber has something of a challenge on his hands, for they have selected a range of different performers and he cannot start writing the song until he knows who he is writing for and what they are capable of. Thank God for that, for recent entries from other countries (<cough>France</cough> etc) have shown what a disaster it can be to try to squeeze a performer into an Identikit song.
Furthermore, Webber was right to discard the girl groups. Sure, they might have made it as a clone of Girls Aloud or The Pussycat Dolls or... I'm sure you can name half a dozen girl groups that all have avid followers but are, from the outside, all remarkably similar. We don't need another girl group doing another girl group number. We don't really need a bloke that sounds like one of Il Divo vying for a solo career. We need something unique, something special, something that will make the animosity of a decade of Wogan insults evaporate, something that will melt Europe's heart and garner the all-important votes.

In short, we need The Twins: 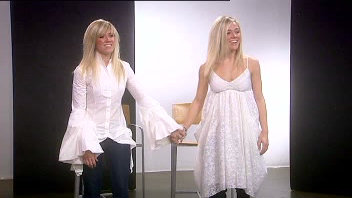 More tears when they found they had made it through selection: 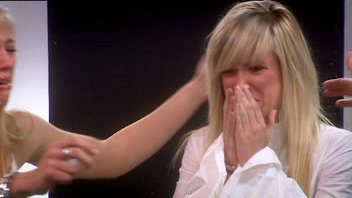 It's up to the public votes now. Let's hope there's some sense of logic and a desire to win; that the era of Wogan-insults will start to slip away as a bad memory...

There will be more next Saturday, BBC One - if you can receive it.

Now that the website is running again; more content to follow...
For those who can't wait, the Leona-Lewis lookee-likee won; which was something of a disappointment to me as her singing ability was, I feel, the weakest of the three finalist acts. The Twins, at least, can be proud of coming in second place and being strong contenders all the way through (Ms. Ewen had to be 'rescued' by ALW once).

Back to the Eurovision 2009 index