Welcome to the Econet Enthusiasts Area (EEA for short). My intention here is to document Econet, and to provide you with the information you require.

This area has been updated and given what the French cutely call a "relooking". I hope the changes bring the EEA into the 21st century, dragging the aging 8 bit hardware kicking and screaming with it!

With the exception of BudgieMgr, these are direct links to the software.
On a RISC OS machine, you can usually download files by clicking the link whilst holding down the Shift key.
Under Windows, right-click and choose "Save target as..." (or similar wording) from the menu that pops up.

Because of a growing number of EPROM dumps and related software, this section has been moved to a separate page.

Provided here are exact copies of the sources to the Econet module, as provided in the batch four release of RISC OS Open. The only difference is that these copies have been loosely colourised to make actually reading them more pleasant...
If you would like to assemble your own module, download the RISC OS sources, do it properly.

Please note that I do not know the value of some things such as the EconetController constant. Windows XP's search facility does not bother looking for text in files it does not recognise, and currently all of my sources have no extension... useful, huh?
Additionally, the software used to colourise is a text editor called ConText (v0.97.5) which does not seem quite powerful enough to correctly colourise APCS-style ARM code (it is aimed more at higher level languages and simpler assemblers) . . . it can't word wrap either! Some day I'll knock up some code to do it better (and by better I mean "like Zap" <grin>).

It does without saying that this is subject to the specified licence conditions; though I can't imagine you'd want to do anything other than read this - it isn't complete enough to assemble...

I did try to make a with-extra-commands version of the Econet module by setting the constants ErrorInfo, ControlBlocks, PortInfo, and Variables all to True (re. s.Module); but sadly this is as far as I got when trying my module on my A3000: 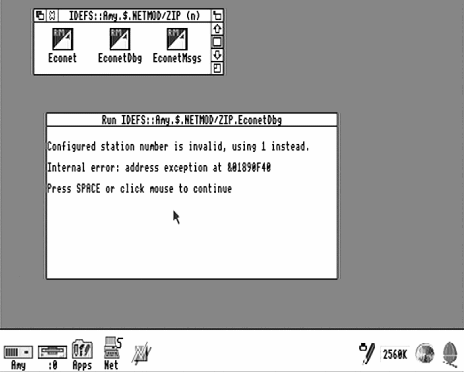 The first problem was my assembler didn't recognise the 'psr' value. I aliased this to '14', which should have worked for 26 bit builds (I suspect I may need a newer compiler!?!?); is address exception problem the Econet module build or is it some little thing which is specific to the ARM2/MEMC system while I'm adding ARM6/IOMD/MMU code, or something like that? I'll need to poke around and see what is being included, and why.
There's no need to worry about the 'using station 1' thing, I did a Delete-poweron because I'd not used the machine in a while.

Don't hold your breath waiting for my module. My RiscPC's floppy drive is not working correctly, so I copy stuff (via ethernet) to the PC where it goes onto a 720K DOS floppy where it goes into the A3000 where it then crashes. :-) Might have been easier if I had Econet hardware on the RiscPC, but I don't...
...unless anybody has an unwanted Econet podule? [mail me!]